The U.S. Mint will issue commemorative $5 gold, $1 silver, and half-dollar clad coins in honor of the National Park Service’s (NPS) 100th anniversary in 2016, and the coin designs feature John Muir, Teddy Roosevelt, and scenes from Yellowstone and Yosemite national parks.

“The coins will be a fun centennial collectible, and the proceeds will contribute to our second century of service to the American people,” says NPS Director Jonathan B. Jarvis. Profits from coin sales will go to the National Park Foundation.  “The funds will improve trails, introduce more young people to the parks, and connect our citizens to the history and culture of our nation,” added foundation President and Chief Executive Officer Will Shafroth. 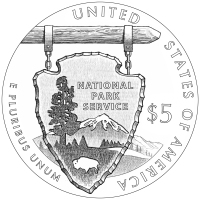 The U.S. Mint has not yet announced the on-sale date for the coins, which will be sometime in 2016.

The gold coin obverse (heads side) features John Muir and Theodore Roosevelt with Yosemite’s Half Dome in the background. The reverse (tails side) features the NPS logo.

The silver coin obverse features Yellowstone’s Old Faithful geyser and a bison, while the reverse depicts a Latina Folklórico dancer and the NPS logo, “representing the multi-faceted cultural experience found in America’s national parks,” according to NPS.

The clad half dollar obverse features a hiker “discovering the majesty of the wilderness” and a small child “discovering a frog hiding in ferns, celebrating the diversity and breadth of the NPS.”  The reverse features the NPS logo.