When I think of National Parks, I think of wide-open spaces, big blue skies, and the smell of pine, or sage, or campfire smoke. There’s always a feeling I get when I enter a national park and get out on a trail, a calmness, a solitude, a full body contentment. At home, in Maine, this feeling goes dormant for a while after each trip, then wakes, becomes a longing, an itch, and then the  obsessive need that sets me into planning for my family’s next trip. 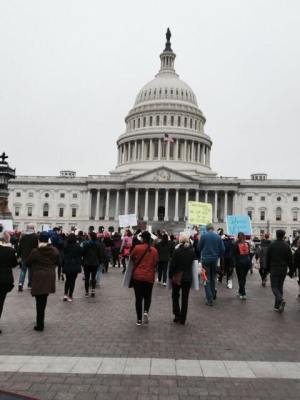 So this weekend, Jan 21st, I went to the national park in our country’s capital, to March for Women’s Rights, with my mom, my daughter, and my best friend, I did not think about how I was traveling to a national park, this was political, this was a stance. I don’t know the smell of Washington, but I was pretty sure it was not sage or campfire smoke. We drove from Maine to CT, where we met my mom, and then got on a bus at 1:00 am to head to DC. Eight hours later we were dropped off in a stadium parking lot of 4000 buses, disoriented and tired. We followed small pods of people who looked like they knew what they were doing. Occasionally, we pulled at a map that we were all too tired to comprehend. The closer we got to the capital, the thicker the streets got with people. Small pods grew into clusters, and clusters into crowds. People held onto scarves and jackets to stay together,  but it was almost impossible. The empty spaces between us disappeared. With no formal beginning or location, we merged and became a March.

I hate crowds and I’m a bit of a claustrophobic, so my immediate response to these situations is anxiety and irritation. But as the sea of pink hats swept by our Nation’s Capital, I felt none of that. I held hands with my little rock star mama and watched my strong, beautiful daughter take photos, her teenage face filled with wonderment and wisdom. I felt that overwhelming contentment, that solitude, that familiar feeling of peace and awe. Like driving into Arches National Park for the first time, when you traverse that entrance road, climbing to an unknown summit, and then turn that corner to a world of towering red formations hollowed out by a sea that once moved across a desert. And then the reminder or the realization that we are so small, and the world is still such a great, and big, and magnificent place.